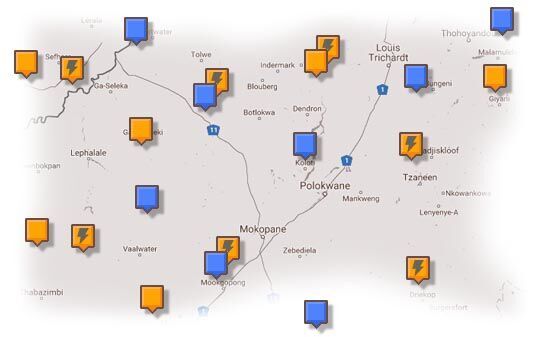 The Waterberg region of the Limpopo Province of South Africa is bordered by the Limpopo River and Botswana border in the West, the provincial boundary in the South and the Magalakwena River in the East. The region is renowned for its hot spring resorts and the beautiful mountain terrain of the Waterberg mountain range. There is plenty of wildlife to be seen on the numerous private game reserves in the region. The spectacular scenery of the region ranges from broad rolling hills to magnificent red sandstone cliffs. Among the hills and mountains of the Waterberg region there is evidence of human occupation dating back thousands of years.

The Waterberg region offers more than 14 000 km of spectacular scenes. There are the Nylsvley Wetlands, where the greatest variety of water-birds are concentrated, the Cape Vulture breeding grounds near Thabazimbi, the Marakele National Park and Lapalala Wilderness Game Reserve and the many curative hot mineral springs. The most important towns of the Waterberg region are Bela-Bela (Warmbaths), Nylstroom, Naboomspruit, Vaalwater, Thabazimbi and Ellisras. Each town in itself is worth visiting, boasting a number of historical, cultural and natural attractions.

The Waterberg region of Limpopo is vast, peaceful and incredibly beautiful. It is a fascinating area with a rich cultural legacy and natural splendour. It is particularly appealing to those in need to find of a place to unwind. The Nylsvley Wetlands are home to the largest number of water birds in southern Africa with more than 400 species. The visitor can be almost guaranteed to sight more than 200 species in a single day. Visitors can stay over in the camping ground, or in one of the many lodges close by to. Bird watchers will also witness Cape Vultures as they ride the thermals over the Marakele National Park near Thabazimbi. The Park, with its rare cycads, tree ferns and yellowwood trees is home to around 800 breeding pairs.

The region encompasses vast tracts of bushveld savannah punctuated with clusters of trees and tall savannah shrubs, the extensive and mountainous Waterberg area and the Springbok Flats in the south. The Waterberg as we know it today is more than three million years old. Archaeological finds and San paintings are just glimpses of the region's past. Part of a pit prop from an Iron Age mine-shaft found in the Rooiberg area west of Bela-Bela gave a radio-carbon date of approximately 1500 AD. 500 years later mining is still an extremely important part of the economic structure of the Waterberg region, which is one of the richest areas of mineral deposits in the world, and forms part of the Bushveld Igneous Complex - a unique complex of volcanic rocks formed more than 600 million years ago and considered to be one of the geological wonders of the world. The complex extends over an area of 50 000 square kilometres, and is rich in platinum, iron ore, vanadium, tin, tungsten, chromium and coal. The region has a thriving mining industry which will last for many years to come.

The African Ivory Route, which has its origins in the legendary exploits of early ivory hunters and gold traders, runs through the Waterberg region. Today the route is an important ecotourism and 4x4 adventure destination much sought after by safari enthusiasts. Traversing rugged mountainous terrain and stunning wilderness areas, the route offers scenic camps, exciting off-roading and many other adventure opportunities for safari enthusiasts. The route will appeal particularly to the person drawn to the African wild. Scattered throughout the Waterberg region are many curative hot mineral springs where visitors can relax and enjoy a sense of well-being.

"Give him a farm in the Waterberg!"

An often-heard exclamation by President Paul Kruger when he was at the end of his tether with a troublesome citizen.

While today no longer regarded quite as remote and deserted as at the turn of the century, the Waterberg is still relatively unknown to many and has been described as South Africa's best kept secret.

The rugged beauty of the area, together with it's diversity in plant and animal life, has led to the development of several exciting eco-tourism projects such as the biosphere reserve, called the Waterberg Nature Conservancy, in which several conservation areas have united to conserve more than 150 000 hectares of the Waterberg habitat.

The Waterberg-range, incorporating many rivers, streams and swamps, stretches for 150 km in a long arc from Thabazimbi in the West, past Nylstroom to Potgietersrus in the east. Apart from the spectacular scenery of the mountains, there are many game sanctuaries, nature reserves and farms with accommodation. The 75 mammal species encountered here include big game such as elephant, lion, white and black rhino, hippo, leopard and buffalo. African python and the Nile crocodile occur in the area. The Waterberg is a birdwatchers' paradise with more than 300 bird species.

Much of the Waterberg is not ideal for crop farming and is also not considered good cattle country. Because the area lacks forestry, mining, industry and the attendant pollution, it is ideally suited for tourism, eco-tourism and hunting. The Waterberg Biosphere Reserve includes the protected areas of Masebe Nature Reserve, Moepel Farms, Mokolo Dam, Marakele National Park, Lapalala Wilderness and the Touchstone Game Ranch.

Apart from the 150 000 hectares of the Waterberg Nature Conservancy, there are a vast number of farms that have changed over to game farming, much of which is interlinked with agricultural practices.

The Waterberg has a long history of human occupation and has been inhabited by a succession of people over hundreds of thousands of years. From Stone Age people, to the San (Bushmen), Khoikhoi herders and Iron Age people, all have left their traces in the form of paintings or iron smelting furnaces. The Waterberg is rapidly emerging as one of the most important San rock art sites in South Africa.

Rhino Museum
This is the first museum devoted entirely to the conservation of the rhinoceros. It highlights the evolutionary history, habitats and landscapes, the rhino wars, illegal trade and use of rhino horn and conservation efforts to preserve rhinos. Considering that both black and white rhinos almost became extinct, that there are only four major populations of rhino surviving in Africa today (Kenya, Zimbabwe, Namibia and South Africa) and that South Africa has presently the highest population of both species, a visit to this museum is certainly worthwhile.

Waterberg Museum
Situated at the original Melkrivier School, it houses fascinating information on the cultural history of the area, dating from the first hominids a million years ago, to the people of the Late Stone Age (San), indigenous hunter-gatherers, the first white pioneers and latter-day famous personalities such as naturalist and poet Eugene Marais.

Church of St John the Baptist
A charming thatched church made of local materials and designed by the famous architect Sir Herbert Baker.